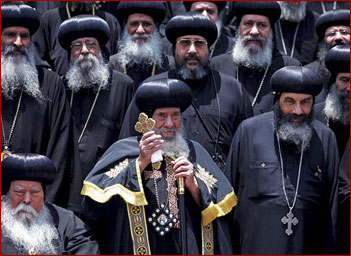 Heavily armed Islamists in Egypt ambushed a youth pilgrimage to a monastery this morning, shooting dozens of bus passengers to death and leaving more to succumb to their wounds on a desert road.

Up to 28 people have been reported dead in the attack in Minya Province, with another 23 injured, though casualty numbers are still being confirmed.

Most of those killed or wounded were originally reported to be children, but those reports have not been confirmed. At this writing only two children, Marvy Hany Mourice, 4, and Mourisca Mina Samouel, 2, both of Al-Omranyia, Giza have been confirmed slain.

Those killed were all Christians, according to survivors. The median age of the victims was 25, according to a local human rights activist.

The ambush started on three vehicles in the pilgrimage – a van, a work truck and a bus for children and youths – at 10:30 a.m. Friday (May 26) on the desert road between Minya and St. Samuel Coptic Orthodox Monastery, just west of the town of Al-Idwa.

Local journalist and human rights activist Ezz Tawfik said 10 armed men dressed in camouflage and riding in three SUVs approached the bus and asked passengers their religion. When they said, “Christian,” the Islamic terrorists forced them out of the bus and opened fire.

Some of the militants attacked the van and truck, and some passengers jumped from their vehicles, only to be gunned down as they tried to sprint away. The dead and dying lay in the desert sand amid Islamic leaflets left by the assailants extoling the virtues of fasting during Ramadan and forgiveness granted to those who abstain from eating during the Islamic ritual.

Ramadan starts on Saturday night (May 27). It is often seen as the worst time for persecution of Christians who live in the Middle East.

No one has claimed responsibility for the attack, but it is widely thought to be the work of the Islamic State (IS) or an allied group. On May 5 in the IS publication “Al Naba,” the terrorist group warned of more attacks in Egypt and urged faithful Muslims to stay away from places where Christians congregate.

On April 9, bombings at two Coptic churches, one in Tanta and another in Alexandria, claimed 49 lives, the overwhelming majority Christians. On Dec. 11, 2016, 29 people were killed when a suicide bomber attacked the Botroseya Chapel in Cairo. The chapel is next to the St. Mark’s Coptic Orthodox Cathedral, which is held by many as the spiritual center of the Coptic Orthodox Church. IS claimed responsibility for the two bombings.

The head of the Coptic Church, Pope Tawadros II, was at the service in Alexandria and had finished addressing the congregation before the blast.

The bombings followed a series of assaults on Christians in Egypt, who make up about 10 percent of the population. A series of murders of Coptic Christians followed, with IS issuing threats on a Feb. 19 video promising to rid the country of “idolaters.” Seven Copts were killed in one month.

On Feb. 23 militants reportedly stormed into the Al-Arish home of Kamel Youssef, then shot and killed him in front of his family. Two days earlier, the body of Saied Hakim, 65, was found Feb. 21 late at night in Al-Arish behind a state-run language school, where he was ambushed by masked gunmen. Hakim was shot in the head several times.

Medhat Saied, 45, Hakim’s son, was abducted and burned alive, his body found in the same place as his father’s, according to local media reports. No one has claimed responsibility for the three killings, but the consensus is that “Wilayat Sinai,” the Sinai Province branch of the Islamic State previously known as Ansar Bait al-Maqdis, killed the men in a quest to terrorize Christians and push them out of the region.

The Feb. 19 video features a recording of the suicide statement of jihadi Abu-Abdullah al-Masri, also known as Mahmoud Shafiq, 22, suspected in the December bombing of the Al Boutrosya Church. The IS speaker said the attack was “only the first.”

“There will be more operations in the near future, if God wills it, as you are our first target and our preferred target in our war,” he said. “You followers of the Cross, you traitors of all ties – know that warriors of the Islamic State are watching you, and our blessed invasion won’t be our last on you. Because what’s coming is worse and hotter than boiling oil, so wait and see, we will be victorious.”

Since Egypt’s 2013 coup, the military-run government has been involved in counter-insurgency operations in the Sinai against members of both the Muslim Brotherhood and Salafi groups now fighting under the banner of the Islamic State. Military outposts in the Sinai have been the sites of repeated attacks by terrorist groups.

The Egyptian army has had little success making strategic counter attacks or effectively protecting members of the Coptic minority constantly under assault.

On Jan. 30, Wa’el Youssef, 35, was shot down at his small grocery store in downtown Al-Arish. The assailants reportedly shot Youssef in broad daylight in front of his wife and one of their two sons. On Feb. 12, masked militants ambushed another Copt, Bahgat Zakher, 40, as he was driving his car through the southern outskirts of Al-Arish. A group of armed jihadis stopped Zakher then shot him in the head, neck and stomach, killing him instantly, according to local media reports.

Another Copt to meet his death at the hands of suspected jihadists in Al-Arish was Adel Shawqy, 57, a day laborer, who was shot in the head on Feb. 13.

On Feb. 16, masked men shot Gamal Girgis, 45, a Coptic schoolteacher and shoe shop owner. They ambushed Girgis while he was tending his shop. He was shot in the head and chest and died instantly, according to local media reports. The attack happened no more than 200 meters (220 yards) from a heavily defended army post.