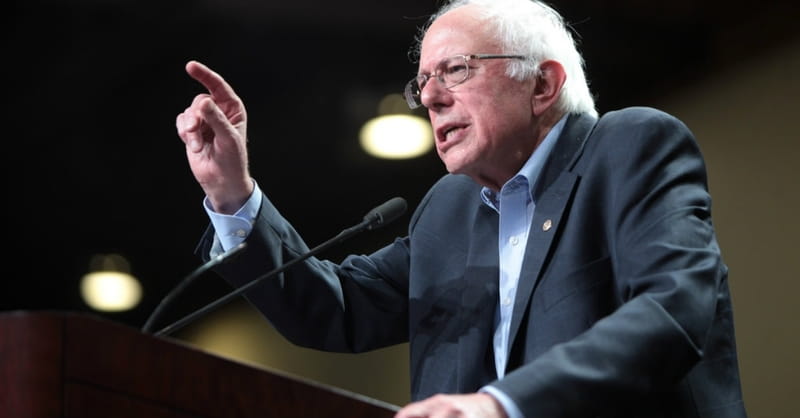 Vought, a graduate of Wheaton College, wrote a defense of the school last year for The Resurgent after many attacked the school for its discipline of a professor who said that Christians and Muslims worship the same God. In the piece, he wrote, “Muslims do not simply have a deficient theology. They do not know God because they have rejected Jesus Christ, his Son, and they stand condemned.” (http://theresurgent.com/wheaton-college-and-the-preservation-of-theological-clarity)

Sanders first asked Vought, “Do you believe that that statement is homophobic?” (Sanders’ questions on this issue begins at 44:25)

Vought replied, “Absolutely not, Senator. I’m a Christian, and I believe in a Christian set of principles based on my faith.” He went on to say that he wrote the piece to defend Wheaton College because it is “a Christian school that has a statement of faith that includes the centrality of Jesus Christ for salvation.”

Sanders interrupted, claiming he did not have much time. He pressed Vought further, “Do you believe people in the Muslim religion stand condemned?” Vought again affirmed his identity as a Christian and that he was writing about the statement of faith at Wheaton.

Sanders continued to push the issue, asking if Muslims stand condemned. When Vought started his answer again with “Senator, I am a Christian,” Sanders interrupted shouting “I understand you are a Christian.” He went on to say there are other religions in our country and asked again if they were condemned.

Vought stated his belief that all people “are made in the image of God are worthy of dignity and respect regardless of their religious beliefs.” Sanders concluded his questioning by announcing his absolute disapproval of Vought and his religious beliefs, saying, “I would simply say, Mr. Chairman, that this nominee is really not someone who this country is supposed to be about.”

Russell Moore, President of the Ethics & Religious Liberty Commission of the Southern Baptist Convention, responded to Sanders’ comments, pointing to his lack of knowledge about basic Christian beliefs and his ignoring article six of the United States Constitution.

“Senator Sanders’ comments are breathtakingly audacious and shockingly ignorant—both of the Constitution and of basic Christian doctrine. Even if one were to excuse Senator Sanders for not realizing that all Christians of every age have insisted that faith in Jesus Christ is the only pathway to salvation, it is inconceivable that Senator Sanders would cite religious beliefs as disqualifying an individual for public office in defiance of the United States Constitution. No religious test shall ever be required of those seeking public office. While no one expects Senator Sanders to be a theologian, we should expect far more from an elected official who has taken an oath to support and defend the Constitution.”