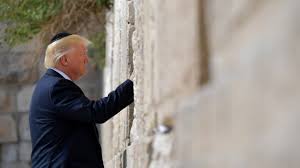 JERUSALEM, Israel – ‘Peace in the Middle East,’ how many times have we heard that before? But will things be different now that President Donald Trump is on the scene? The peace process has never seen anything quite like him.

Before Trump was president, he was known as one of the best deal makers in the entire world. Well, now he’s come to Israel, hoping for what he calls “the ultimate deal” – peace between Israelis and the Palestinians.

In a speech Tuesday at the Israel Museum in Jerusalem, he assured the Jewish state that he is “personally committed” to making that a reality.

Striking a Mideast peace deal, however, is not going to be an easy task. There are plenty of stumbling blocks ahead. But one thing is for sure: All roads lead to Jerusalem.

The ultimate stumbling block in any sort of two-state solution: The fact that both Palestinians and Israelis see Jerusalem as their capital. The official U.S. policy is that it’s disputed territory, but as a candidate, Trump told CBN News he was ready to move the U.S. Embassy from Tel Aviv to Jerusalem.

But things are different now that Trump is president. He’s dialing it back.

He told us in an interview after becoming president, “Well, there is certainly a chance of it. Absolutely. But we are going to be — we are doing very detailed studies on that and it will come out very soon. I hate to do that because that is not usually me, studies,” he said, adding, “But this has two sides to it. It’s not easy.”

That’s because a provocative step like moving the embassy to Jerusalem may disrupt the peace process before it gets going. So, Trump’s trip to the Mideast came without an embassy announcement. That has been disappointing to many Israelis.

Trump did make history, though. He became the first sitting U.S. president to come to Israel and visit the Western Wall in Jerusalem. Some see that as acceptance – as the United States’ acceptance – of Jerusalem. But some members of the Trump administration won’t say the wall is part of Israel. It’s all part of a very sensitive process.

“It’s not easy. I’ve heard it’s one of the toughest deals of all. But I have a feeling that we’re going to get there eventually. I hope,” President Trump said.

“I do look forward our discussions, which I think are peppered with possibility,” said Israeli Prime Minister Benjamin Netanyahu.

There is hope, and it comes from an unlikely customer: Iran.

The administration believes additional Arab nations, like Saudi Arabia, will be willing to work more closely with Israel and stand together against a common enemy, thus advancing the peace process.

“Definitely President Trump has the intention,” Phares said. “He has the heart to it. He wants to achieve it as something big that no previous president has been able to solve, but realities are realities, not just in our politics here in the United States, but in the Middle East.”

President Trump knows he will have his hands full getting the Palestinians to the table to negotiate. His meeting in Bethlehem with Palestinian Authority President Mahmoud Abbas was an attempt to see what is possible.

“We have no problem with Judaism. We have a problem with the occupation,” Abbas said during a meeting with Trump in Bethlehem, Tuesday morning.

For his part, President Trump is keeping his cards close to the vest. He hasn’t signaled what a peace plan would look like or how to get there. That’s an intentional move. It’s part of his deal-making DNA. The question is – will that and his big personality be able to push this peace process over the finish line?